Adapting to climate change in shifting landscapes of belief

Religious beliefs, an important element of culture, influence adaptation to climate change. Less understood is how changing beliefs shape the adaptive capacity of communities responding to climate change. In the last century sub-Saharan Africa has experienced a transformation in beliefs. Since 1900 Christians have increased 70-fold while in rural areas Traditional Beliefs and associated Traditional Ecological Knowledge (TEK) continue to influence the lived practices of vulnerable rural communities. Using two case studies of rural communities in Malawi (Bolero) and Zambia (Monze) we explore how Christianity and Traditional beliefs (and associated TEK) co-exist and assess if, and how, holding multiple belief systems affects climate-sensitive livelihood practices of food production. In Bolero we observed a lack of tensions between belief systems with Traditional leaders and elders noting the flexibility of adhering to both belief systems. In Monze however, basing livelihood decisions on the practice of rain-rituals resulted in strong tensions. In both communities elders noted their concern of how changing beliefs affect adherence to TEK management practices. We find that culture and beliefs play an important role in adaptive capacity but are not static. In the context of changing beliefs, adaptive capacity will be influenced by how different belief systems co-exist and how epistemological and intergenerational frictions are negotiated. As climate services become the focus of research and government interventions in vulnerable regions, avoiding culturally and economically expensive mal-adaptation will require giving attention to the complexity and dynamism of changing religious landscapes. 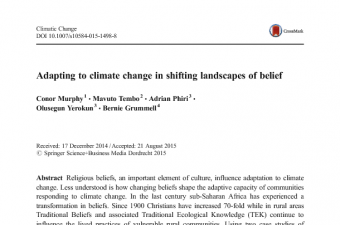