Back to Office Report on the 9th Community Based Adaptation Conference, Nairobi

The 9th International Conference on Community-Based Adaptation (CBA9) took place in Nairobi, Kenya from 24-30 April, 2015, hosted by the Government of Kenya.

The theme of the 2015 conference was 'Measuring and enhancing effective adaptation'. The event provided an opportunity to share the latest developments in community-based adaptation (CBA) with an international audience.

CBA9 concluded with the release of the Nairobi Declaration on Community-Based Adaptation to Climate Change, which stated the importance of addressing the needs and interests of the poorest and most vulnerable in international agreements on sustainable development, development finance and climate change.

It would be useful to have a sharing link with this document so it can be more widely communicated, e.g. http://pubs.iied.org/G03919.html

That's great, thanks for adding in the link. 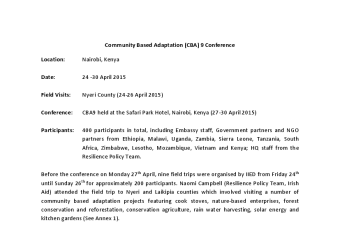 Loss and damage: a guide for the confused