Ethiopia in East Africa has a population of over 90 million people and its territory covers 1,127,127 sq km. Recent reports from the Famine Early Warning Systems Network (FEWS NET) indicate that there has been an increase in seasonal mean temperature in many areas of Ethiopia (IPCC, 2014) and according to the UNDP climate change country profiles, the average annual temperature in Ethiopia is projected to increase by 1.1 to 3.1C degrees by the 2060s (McSweeney et al. 2010). In 2013, Ireland provided a total of €15,425,000 climate finance. 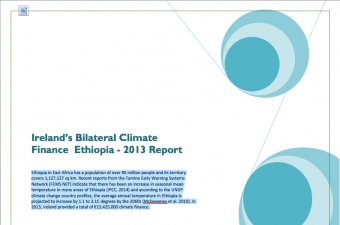