Mozambique is on the south-east coast Africa and covers a territorial area of 801,590 square kilometres and has a population of over 25 million. Annual temperature has increased by 0.6C degrees from 1960 to 2006 and a projected increase between 1.0 to 2.8C degrees by the 2060s (McSweeney et al, 2010). Generally, projections suggest that the climate may become more extreme, with hotter drought spells and more extreme floods. The central zone is likely to be hardest hit, especially at low altitudes (INGC, 2009). Ireland has contributed approximately €2,223,255 in Climate Finance to Mozambique in 2013. 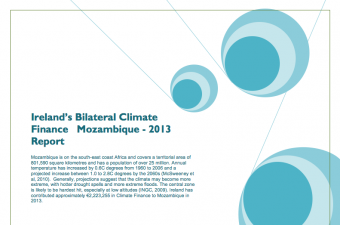