Uganda is a landlocked country in east Africa, approximately 236,040 square kilometres in size. The population is approximately 37.5 million and Uganda is ranked 161st in the HDI ranking and 24th in terms of vulnerability. Average annual temperature has increased by 1.3 degrees C since 1960 and there will be a projected increase between 1.0 degrees C and 3.1 degrees C and increases in annual rainfall by the 2060s (McSweeney et al. 2010). Ireland supports climate response in Uganda through livelihood, micro-finance, agricultural and economic trade programmes with approximately €757,423 in climate finance in 2013. 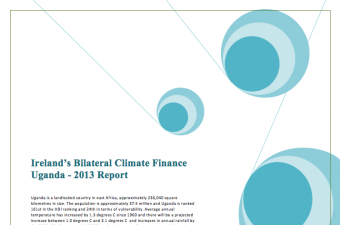