The Government of Nepal has started the implementation of the Climate Change Policy 2011 which has the goals of improving livelihoods by mitigating and adapting to the adverse impacts of climate change, adopting a low-carbon emissions socio-economic development path and supporting and collaborating in the spirit of the country's commitments to national and international agreements related to climate change.

The Policy emphasises, inter alia, the implementation of activities related to climate adaptation and resilience. Both NAPA and the Policy have made mandatory provisions to disburse at least 80 percent of the available budget for the implementation of adaptation and climate change activities at the local level. This is expected to support the most climate vulnerable communities and people to adapt with climate change and improve livelihoods.

The disbursement and expenditure procedures will be project and/or programme-based. During the NAPA inception workshop in May 2009, participants suggested to formulate Local Adaptation Plans for Action (LAPA) for the effective implementation of NAPA. The National Framework for LAPA has been formulated in order to translate the suggestions into action and to assist identification of local adaptation actions with people's participation as prescribed in NAPA, development and implementation of action plans, 3 including support for the integration of climate change adaptation into sectoral and area-specific plans.

The LAPA was designed and piloted in 10 districts namely Ilam, Udaypur, Nawalparasi, Kapilvastu, Kaski, Dadeldhura, Pyuthan, Rukum, Achham, and Kalikot1 in 2010. This LAPA framework will help to integrate climate adaptation and resilience aspects in local and national plans. For this, agriculture, forestry, health, water and sanitation, watersheds and microfinance have been identified as the main entry points. Similarly, education, local infrastructure, disasters and other environment-related areas may also be taken as entry points. The Framework was refined to make it implementable with inputs from regional and national consultation processes2 and the outcomes of harmonisatio 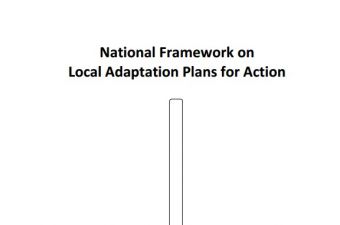