A New Climate for Peace: Taking Action on Climate and Fragility Risks

Climate change is a global threat to security in the 21st century. We must act quickly to limit the future risks to the planet we share and to the peace we seek. Achieving a robust agreement to reduce emissions is of paramount importance. Yet the relentless momentum of change means that despite future emissions reductions, the physical impacts from anthropogenic climate change are already visible and will continue for decades to come. Climate change will stress our economic, social, and political systems. Where institutions and governments are unable to manage the stress or absorb the shocks of a changing climate, the risks to the stability of states and societies will increase. The sharpest risks emerge when the impacts of climate change overburden weak states. Climate change is the ultimate “threat multiplier”: it will aggravate already fragile situations and may contribute to social upheaval and even violent conflict. While all will feel the effects of climate change, the people in the poorest countries — and the most vulnerable groups within those countries — are the most threatened. In places affected by fragility and conflict, people face especially challenging obstacles to successful adaptation. If they fail to adapt to the effects of climate change, the risk of instability will increase, trapping them in a vicious cycle. But even seemingly stable states can be pushed towards fragility if the pressure is high enough or the shock too great for systems to manage peacefully. Peace and security are paramount for all of us. We all share the risks — and thus we share the responsibility for tackling them. “A New Climate for Peace: Taking Action on Climate and Fragility Risks”, an independent report commissioned by members of the G7, identifies seven compound climate-fragility risks that pose serious threats to the stability of states and societies in the decades ahead. Based on a thorough assessment of existing policies on climate change adaptation, development cooperation and humanitarian aid, and peacebuilding, the report recommends that the G7 take concrete action, both as individual members and jointly, to tackle climate-fragility risks and increase the resilience of states and societies to them. 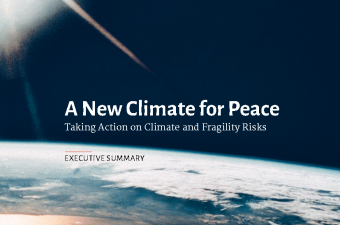