Paving the Way for Climate-Resilient Infrastructure: Guidance for Practitioners and Planners

International Conference: Strategies for Adapting Public and Private Infrastructure to Climate Change San Salvador, El Salvador June 30, 2010 Countries across the globe are experiencing extreme weather events that are resulting in catastrophic impacts to humans and infrastructure, both of which are extremely susceptible to climate variability. The primary cause of these tragedies is undoubtedly related to global climate change. In November 2009, the country of El Salvador experienced extreme rainfall over the course of two days, 7-8 November, which caused severe flooding and landslides in seven of the country’s 14 departments, including San Salvador. The heavy rains killed about 200 people and left thousands of households without homes. Damage to infrastructure was also high, with 43 bridges destroyed and another 161 damaged. Many communities were left without access to transport, communications, electricity and basic services. The damage from the rainfall was so significant that it prompted decision makers to take immediate action, and seek international policy capacity building assistance. In the same year, El Salvador’s Ministry of Public Works (MOP) and Ministry of Environment and Natural Resources (MARN) requested support from the United Nations Development Programme (UNDP) to develop of a strategic framework for decision-making processes to increase the climate resiliency of infra- structure. The framework would incorporate long-term climate change adaptation (CCA) and immediate disaster risk management (DRM) into policies for the planning, design, construction (including retrofitting and reconstruction), operation and maintenance of public infrastructure. As part of UNDP’s support to El Salvador, an international conference on strategies for adapting public and private infrastructure to climate change was organized in San Salvador on 30 June 2010. 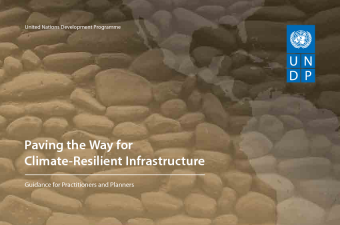