Notwithstanding its very low emissions of around 1.4 t CO2e per capita in 2015, Malawi as a Party to the United Nations Framework Convention on Climate Change (UNFCCC) has made firm decisions and plans to move the country’s development pathways towards a green economy based on national circumstances and capabilities. It is in light of the above that the country's Intended Nationally Determined Contribution (INDC) has been developed in direct response to decisions adopted at the 19th and 20th Sessions of the Conference of the Parties (CoP) to the 1 2008 Population Census by National Statistical Office - Population Projections sourced from http://www.nsomalawi.mw/publications/134- population-projections-for-malawi.html Page 2 UNFCCC. The INDC aims at achieving the objective of the UNFCCC as set out in Article 2 of the Convention and also contribute to sustainable development. 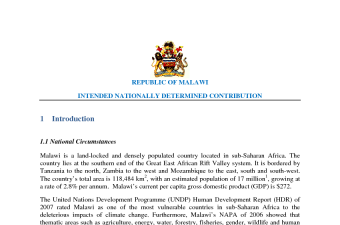