Shock Waves: Managing the Impacts of Climate Change on Poverty

Ending poverty and addressing climate change are the two defining issues of our time. Both are essential to achieving sustainable global development. But they cannot be considered in isolation. This report brings together these two overarching objectives and explores how they can be more easily achieved if considered together. It demonstrates the urgency of efforts to reduce poverty and the vulnerability of poor people in the face of climate change. It also provides guidance on how to ensure that climate change policies contribute to poverty reduction and poverty reduction policies contribute to climate change mitigation and resilience building. Our studies show that without action, climate change would likely spark higher agricultural prices and could threaten food security in poorer regions such as Sub- Saharan Africa and South Asia. And in most countries where we have data, poor urban households are more exposed to floods than the average urban population. Climate change also will magnify many threats to health, as poor people are more susceptible to climate-related diseases such as malaria and diarrhea. As the report points out, poverty reduction is not a one-way street. Many people exit or fall back into poverty each year. The poor live in uncertainty, just one natural disaster away from losing everything they have. We need good, climate-informed development to reduce the impacts of climate change on the poor. This means, in part, providing poor people with social safety nets and universal health care. These efforts will need to be coupled with targeted climate resilience measures, such as the introduction of heatresistant crops and disaster preparedness systems. The report shows that without this type of development, climate change could force more than 100 million people into extreme poverty by 2030. But with rapid, inclusive development that is adapted to changing climate conditions, most of these impacts can be prevented. Over the longer term, we will face the limits of what good development and risk management can achieve. Only immediate emissions-reduction policies can limit the long-term impacts of climate change on the poor. This report shows that these policies need not burden, and can actually benefit, the poor, through the use of proven mechanisms such as social safety nets to mitigate the impact of higher energy prices. The international community must also support poor countries that cannot provide such protection. The report combines the findings from household surveys in 92 countries that describe demographic structures and income sources with the most recent modeling results on the impacts of climate change on agricultural productivity and food prices; natural hazards such as heat waves, floods, and droughts; and climate-sensitive diseases and other health consequences. Based on these findings and results, the report gives a renewed urgency to the objective of eradicating extreme poverty by 2030 while tackling climate change. Development and poverty alleviation reduce people’s vulnerability to the effects of a changing climate. And ending extreme poverty will be more achievable now—with limited climate change impacts—than later, when impacts are likely to be larger. The report shows us that the best way forward is to design and implement solutions to end extreme poverty and stabilize climate change as an integrated strategy. Such concerted action, implemented quickly and inclusively, can help ensure that millions of people are not pushed back into poverty by the multifaceted impacts of climate change. 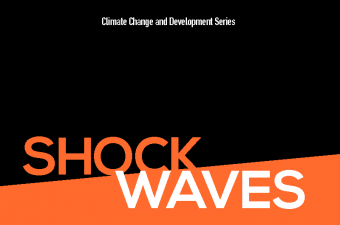 Designing the next generation of climate adaptation research for development

Near-term climate change in Zambia: What the research tells us