Welcome to the Research Presentations of the Transformative Engagement Network (TEN) project.

This project, between four universities, two in Zambia, one in Malawi and one in Ireland, aims to transform the nature of the engagement between the various stakeholders impacted by or concerned with climate change and food supply. The project is particularly focused on exploring ways to insert the voice and concerns of the most vulnerable food producers into climate change debates.

We know from existing research conducted by the International Commission on Climate change and Development (2009) and the United Nations Development Programme that knowledge about adapting to climate change and food security is failing to reach the smallholder farmers who need it most. They also note that the rapid impact of climate change renders many development responses inappropriate and makes the capacity for adaptability the central challenge of our time. The TEN project is firmly located within the context of these pressing and interlinked social and environmental challenges.

By way of addressing these challenges, the TEN project prioritises the inclusion of perspectives from different players concerned with climate change and hunger, in particular the perspectives of those living and working at the local community level. Combining the western socio-scientific knowledge found in universities, development agencies and government bodies with the lived knowledge of small-holder farmers, who are among the world’s most excluded but most critical to adaptive success, is a major challenge that the project attempts to address.

The perspectives TEN seeks to bring together are not easy bed fellows. Communities are likely to favour ways of knowing the world that privilege holism and connectedness while universities privilege discipline-specific empirical research. The project’s goal is to explore the possibilities of some kind of philosophical and practical meeting of these different positions, mainly through an adjustment on the part of the universities to a more contextualized understanding of the world. The direct importance of this goal is to ensure that as solutions are sought to the challenges of climate change, the knowledge of local communities and cultures can be drawn on to inform decision-making at national and international levels. The aim is to initiate exchanges of knowledge and expertise between rural communities, the agencies and organisations that work with these communities, and between national and international bodies concerned with climate change.

Research was undertaken on the TEN project as part of the Masters in Transformative Community Development. The Masters programme specifically recruited community practitioners, policy-makers and decision-makers who were already in positions of influence within organisations, agencies and institutions that work directly with communities experiencing food insecurity, nutritional challenges and climate change. Abstracts summarising the research conducted by thirty-five students are presented here. We also include a brief report on Community Engagement in Malawi and Zambia based on research conducted among the students and the organisations where they work. The research provides insights into the nature of the relationships between frontline agencies and the smallholder communities with whom they work and in so doing it provides pointers to the kind of changes in discourses and actions that are possible and necessary. 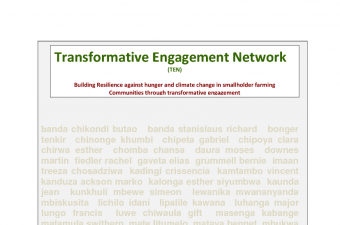 Adapting from the Ground Up: Enabling Small Businesses in Developing Countries to Adapt to Climate Change

Building Climate Resilience from the Bottom Up