If humanity’s greenhouse gas emissions continue to increase, the average temperature of the Earth’s lower atmosphere could rise by more than 4°C (7.2°F) by the end of the 21st century. But what does a global average temperature rise really mean? How would we experience it on a daily basis? How would it affect our homes and the places we cherish?

To find out what could lie in store, the WMO invited television weather presenters from around the world to imagine a “weather report from the year 2050.” What they created are only possible scenarios, of course, and not true forecasts. Nevertheless, they are based on the most up-to-date climate science, and they paint a compelling picture of what life could be like on a warmer planet.

These worst-case futures do not need to happen. WMO is releasing Series 4 of the future weather reports (together with videos about climate change impacts on well-known UNESCO World Heritage Sites) in advance of the December 2015 United Nations climate change conference in Paris (COP-21). These videos highlight the need for action to reduce global greenhouse gas emissions and strengthen our climate resilience. Series 3 was inspired by the March 2015 World Conference on Disaster Risk Reduction, Series 2 promoted the December 2014 United Nations climate change conference in Lima (COP-20), and Series 1 supported the UN Secretary-General’s call for action at the September 2014 UN Climate Summit. 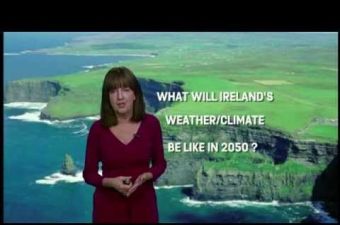 Designing the next generation of climate adaptation research for development

Near-term climate change in Zambia: What the research tells us

Shock Waves: Managing the Impacts of Climate Change on Poverty